About music and venue

Great Hall of the Moscow Conservatory 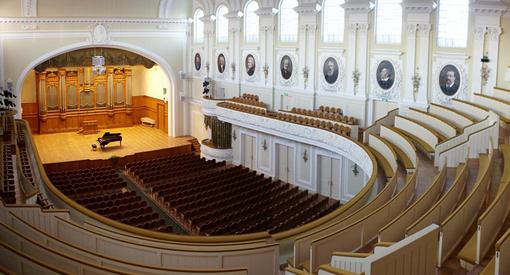 In terms of its acoustics, the Great Hall of the Moscow Conservatory is regarded as one of the finest concert halls in the world. Many great soloists, ensembles and orchestras have performed there and the Hall has served as a venue for music festivals and competitions, including, since its founding in 1958, the International Tchaikovsky Competition.

Construction of a new building for the Moscow Conservatory and its magnificent Great Hall, with 1737 seats, was initiated in the mid-1890s by Vasily Safonov, an outstanding figure in Russian music who served as head of the Conservatory for 17 years.

Architect Vasily Zagorsky designed the building. The upper side walls of Great Hall are decorated with large medallion portraits of Russian and Western European composers by Nikolai Bondarevsky, and the arch above the stage has a bas relief of the Moscow Conservatory’s founder, Nikolai Rubinstein, by Alexander Aladin.

Occupying the rear of the Great Hall’s stage is a superb organ, built in 1899 by the famous French organ company Cavaille Coll, which was given to the Conservatory by patron of the arts Sergei von Derviz. The foyer on the stalls level of the Great Hall was decorated with a stained glass-window depicting St.Cecilia, the patron saint of music, which was destroyed in a bombing raid during the Second World War.

The Great Hall was opened on April 7 (20), 1901. The eminent French organist and composer Charles Widor wrote a flattering review of the new concert hall for the Parisian magazine Le Menestral. “Of all the famous concert halls,” he wrote, “this one seems to me to be the most successful acoustically. The power and charm of the orchestra, the magnificence of the organ, the lightness and beauty of the human voice and the fullness of sound of the piano or harp are conveyed there with incomparable distinctness.”

The Great Hall has sometimes served as more than just a concert hall. During the First World War, from 1915–1917, it housed a military hospital, and from 1924 to 1933, it was a popular daytime cinema.

Since 1940, the Conservatory has proudly borne the name of Pyotr Ilyich Tchaikovsky, and in 1954 a statue of the composer was erected in front of the entrance to the Great Hall.

By decision of the Conservatory Academic Council in November 2006, the Great Hall was named in honor of Nikolai Rubinstein. Thanks to restoration work carried out in 2010–2011, the Great Hall has regained its initial appearance and the St.Cecilia stained-glass window has been restored. 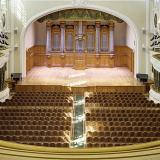 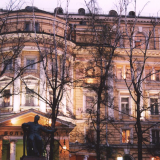 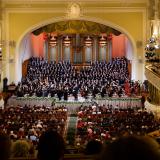 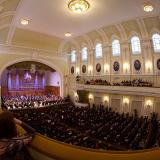 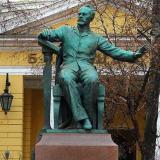